Frontpage headline of The Sowetan from June 11, 2010 reads “Make Us Proud.” 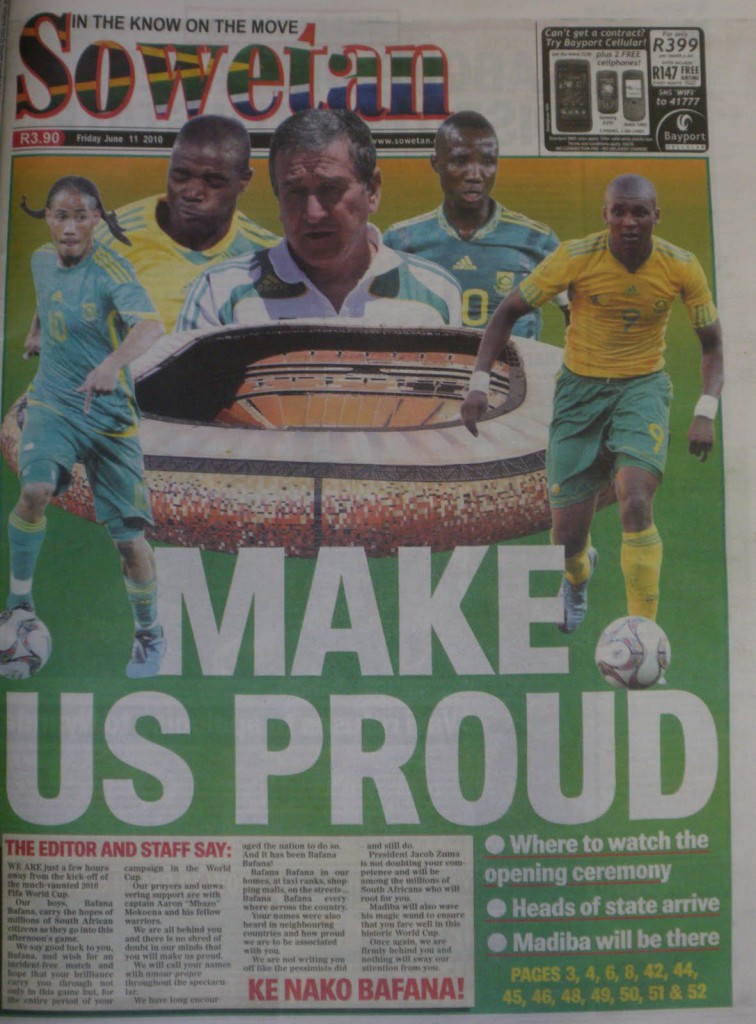 The Editor and Staff Say:

We are just a few hours away from the kick-off of the much-vaunted 2010 Fifa World Cup.

Our boys, Bafana Bafana, carry the hopes of millions of South African citizens as they go into this afternoon’s game.

We say good luck to you, Bafana, and wish for an incident-free match and hope that your brilliance carry you through not only to this game but, for the entire period of your campaign in the World Cup.

Our prayers and unwavering support are with captain Aaron “Mbazo” Mokoena and his fellow warriors.

We are all behind you and there is no shred of doubt in our minds tht you will make us proud.

We will call your names with amour propre throughout the spectacular.

We have long encouraged the nation to do so. And it has been Bafana Bafana!

Bafana Bafana in our homes, at taxi ranks, shopping malls, on the streets-Bafana Bafana everywhere across the country.

Your names were also heard in neighbouring countries and how proud we are to be associated with you.

We are not writing you off like the pessimists did and still do.

President Jacob Zuma is not doubting your competence and will be among the millions of South Africans who will root for you.

Madiba will also wave his magic wand to ensure that you fare well in this historic World Cup.

Once again, we are firmly behind you and nothing will sway our attention from you.

+
Welcome to IMBIZA: A Digital Repository of the 2010 World Cup.

This work is licensed under a Creative Commons Attribution-NonCommercial-ShareAlike 4.0 International License. Please refer to the Citation Guide for proper citation format to use any content from this site.